For the first time ever the Jester Monster Truck team would visit New Jersey’s MetLife Stadium for one of the biggest summer Monster Jam stops on the schedule. Being so close to the big apple of New York City, it would be an exciting time for the team to perform in the great Monster Jam fans, but to also take in some sights along the way. To cap it off, it would be an awesome showing for the team and one that earned many new Jestalade fans on that night. 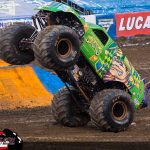 Coming into East Rutherford, it had been a busy few weeks for the team as they traveled north into Canada for a three show weekend in Nova Scotia, followed by another three show weekend in Bangor, Maine, before heading to Foxborough, Massachusetts to start of a stretch of back to back stadium shows. The weekends had ups and downs with some bright spots and good performances, along with a couple events hampered by mechanical gremlins. The most disappointing would be Foxborough where a broken knuckle after the first jump in freestyle would cut their night short. Looking to get the monkey of their backs in East Rutherford, the team gave it their all to make sure the truck was 110% and were looking for redemption in the next event. While racing was an early exit in round one with a loss to BJ Johnson and Gas Monkey Garage, Matt Pagliarulo and the Jester would get the crowd on their feet in the two wheel skills competition. Pagliarulo loves big air and wheelies, so why not combine the two? It would be a big leap into a tailgate dragging slap wheelie on the first hit that got the crowd’s attention. The next attempt would be a similar jump, but a little bigger, however the bounce didn’t quite work as well with the truck finding a little bit of mud causing a loss of traction. It was still a big jump and the fans appreciated the efforts from the Jestalade camp.

Freestyle would be another break out performance from the team as Pagliarulo put together a great run that had MetLife Stadium fired up. Right from the start it was big air as the Jestalade went skyward with big leaps, including two of the biggest jumps by anyone that night. Pagliarulo also worked in some cool wheelies before getting back to even more big air with two more massive launches. The last jump wasn’t quite straight and the truck landed hard on the left side which pitched the truck hard to the right. Pagliarulo would try to turn into the bounce and save the truck but there just wasn’t enough space along the sideline to do so safely and the result would be a rollover. The crowd was electric and the damage was fairly minor and Pagliarulo was ecstatic with the performance. It was an awesome showing for the team and much needed after the disappointing weekend in Foxborough. After the event they took some time to explore New York City before making the trip back to Florida. Along the way they made a pit stop to visit the famous Digger’s Dungeon, which is the home shop of the Grave Digger team. The kids were excited to check out the shop and all the historic trucks around the property.

For now it’s a little down time for the team before we get back to doing more events. Thanks to all the fans for their support as well as our great sponsors. Also a big thank you to the whole family and crew for making the Jester as great of a truck as it is. Be sure to keep up with all things Jester Monster Truck by following us on Facebook and Instagram.